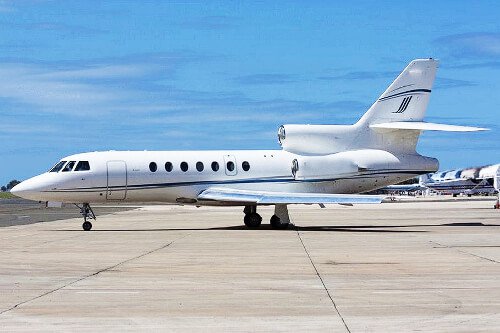 The Dassault Falcon 50 is commonly flown between France and India as a French-built super mid-sized corporate jet with a long range body. It boasts a 3-jet engine layout using an S-duct central engine for greater power. This ensures a good utilization of fuselage across the sections with similar capacity as found in Falcon 20 twinjets.

It comprises a totally new design with a more advanced wing design for greater aesthetics. The first prototype was developed and tested in 1976 for maritime surveillance as well as protecting the environmental.

It was later replaced through a refined design on improved engines for longer range. These improvements transform the corporate jet to become very popular for its long-range capability and luxury with a fast 3- jet engine.

The Dassault Falcon 50 enjoys a larger fuselage with super mid-size feature. It flies frequently between France and India with travelers from all walks of life. New innovative designs are expected to enhance the Falcon 50 with the possibility of blended winglets for greater aesthetics and power. This new design would be in partnership with Aviation Partners Inc. when High Mach blended winglets are fitted into the Falcon 50.

The Falcon 50 also lands at Tehran, Iran and Italy for their Air Force flights.