Chartering a Jet Flight from Toronto to Jacksonville 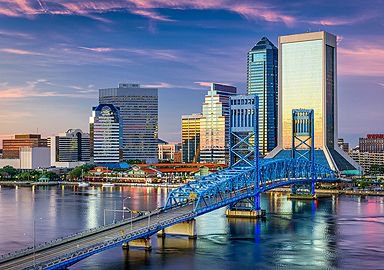 Jacksonville doesn't get as much attention as some other major Florida cities like Orlando or Miami, but it is a rapidly growing city that offers plenty for tourists and business travelers alike. The northern Florida city is actually the largest in the state by population, and it has many historic sites from its early days occupied by Native American then French then British peoples.
Jacksonville sits on the St. John's River and is near the beaches, so it offers plenty of water sports and recreation. After strolling the museums and shops, you can also sit down for some fine dining at one of the many restaurants.
Whether you are headed to Jacksonville for business or pleasure, private jet travel is the way to go. You'll get your trip started right, and you'll feel rested and ready to take on whatever you have planned in the city.

There are a total of nine airports in and around Jacksonville, which gives you plenty of options for your travel.

When you travel by private jet, you have more flexibility in your travel plans since you can fly into smaller airports and air fields that are off the beaten path. That lets you avoid the huge crowds and cut down on your overall travel time.

The flight from YYZ to JAX takes a little over two hours, so make it a more pleasant trip by choosing private jet travel.

Best Time to Travel to Jacksonville

Jacksonville and other Florida cities are very popular in the winter months, so you'll want to avoid traveling then when the crowds are heavy. However, you'll also want to avoid the summer when the temperatures are scorching.

Book your travel during the spring and fall when the temperatures are moderate and the crowds are manageable. The water may be too cold to swim, but you'll love the weather.