Chartering a Jet Flight from Toronto to Philadelphia 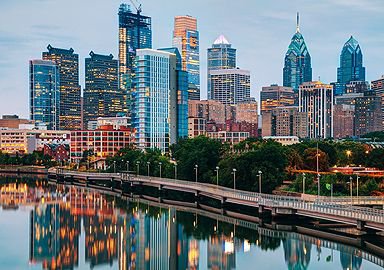 Philadelphia is not only a center of business, but it is also a popular tourist destination thanks to its historic significance in the formation of the U.S. government. Philadelphia had a key role in the American Revolution, and it is where the founding fathers signed the Declaration of Independence and the Constitution. You can still see many of the sites where these historic events took place.
In addition, Philadelphia is one of the biggest cities in the United States, and it has a variety of attractions for people of all tastes. You can visit any time of the year for great food, world-class art and cultural attractions, and more.

Because Philadelphia is part of such a large metropolitan area, there are multiple airports to accommodate your travel plans. There are four large, commercial airports, and there are eight general airports with smaller landing strips for charter and other flights.

The main airport in the city is the Philadelphia International Airport (airport code PHL), which is just 11.6 miles from downtown Philadelphia. The airport is the largest in the Delaware Valley. The three other major airports in the area are in neighbouring New Jersey and Delaware.

The Northeast Philadelphia Airport (airport code PNE) is just 14.4 miles from downtown Philadelphia, and it offers a quieter landing space for private charters and other flights.

A flight from Toronto's YYZ to PHL is just about an hour and a half, which means that Philadelphia is the perfect weekend trip any time you're feeling up for it.

With so much to do in Philadelphia, you'll need to carefully plan your trip before you go. Otherwise, you'll end up overwhelmed with the options or missing out on some really great experiences.

Check out a few guidebooks or tourism sites to get a feel for the options and make a list of "must do"s. If you still aren't sure, you can catch a hop-on/hop-off bus to see the sights around the city without stress, or you can sign up for a group tour.

Of course, with Philadelphia being such a short flight away, you can always plan multiple trips to see everything you want.