Chartering a Jet Flight from Toronto to Salt Lake City 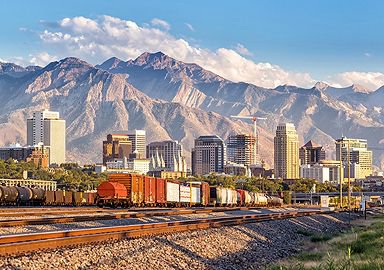 Salt Lake City is a thriving, growing city against the backdrop of beautiful mountains and its namesake - the Great Salt Lake. The city offers a wonderful merging or urban and rural elements, allowing you to enjoy some of the perks of a large city without being overwhelmed by sprawl. You can go to clubs and sophisticated restaurants or retreat to the beautiful landscape and enjoy outdoor recreational activities.
The city is also a big draw for members of the Church of Jesus Christ of Latter-Day Saints, since the city was founded by one of the church's early leaders. The church is also headquartered in the city, and one of the church's largest temples is located there.

You have a couple of options for flying into Salt Lake City:

However, most use SLC to get into Salt Lake City since it is so close to the action in the city and offers the most flight options.

With a charter flight, you can get around the hustle and bustle of the airport and shave some time off your travel. The flight from Toronto's Lester B. Pearson International Airport (airport code YYZ) to SLC is a few minutes shy of six hours. You can save even more time by taking a charter flight and skipping the check-in lines and security screenings.

Planning for Your Trip

Salt Lake winters can be quite cold, so many prefer to go in the spring or summer when the temperatures are warmer. The city has numerous museums, performing arts spaces, festivals and conventions. Check the calendar before you go, and book your tickets in advance to make sure you get to see everything that you want.