Chartering a Jet Flight from Toronto to San Diego 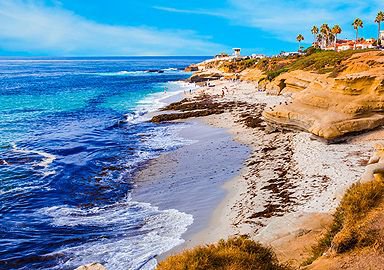 San Diego is a beautiful coastal city that offers both gorgeous beaches and a thriving city life. It is one of the largest cities in California, and it is right on the border of Mexico, so it is a popular tourist destination for people from all over the world.
Some of the city's offerings include well-known museums, theaters, top-notch restaurants, and beaches with white sands and deep blue waters. Several national sports teams also call the city home, including the San Diego Padres and the San Diego Chargers.
Thanks to the city's sunny climate, you can visit San Diego any time of year and have a wonderful time.

San Diego International Airport (airport code SAN) is the primary airport in the city, and it is just three miles outside the central business district. However, several other airports are also available.

Several non-towered airports are also nearby, as are several military airports. Since San Diego is so close to Mexico, you can also fly into the Tijuana International Airport.

Chartered jet service from Toronto's YYZ to SAN takes a little over five hours. However, your choice of airport can change those flying times slightly.

High season in San Diego is from June to August, when the temperatures are at their highest and people are thinking of visiting the beach. If you travel during this time, you are going to pay more for flights and hotels.

Low season is from November to January, when temperatures are still mild but not as warm.

If you want to enjoy good rates while still getting warmer weather, consider going during the "shoulder season," which is February to May and then again from September to October.