Chartering a Jet Flight from Toronto to Scottsdale 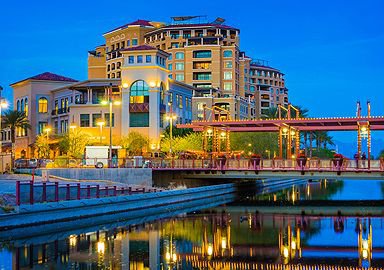 Scottsdale doesn't have the same reputation as a summer getaway as places like California or Florida. But the Arizona city has a bustling night life, plenty of cultural opportunities, and a climate to rival even the sunniest beach towns. In fact, Scottsdale has been described as "a desert version of Miami's South Beach" by The New York Times.
The winters are mild in Scottsdale, so you can enjoy a wonderful visit any time of year.

Scottsdale is just outside the Greater Phoenix Area, so there are plenty of opportunities for getting into the city.

A flight from YYZ to PHX takes about four hours and 40 minutes.

You'll definitely want to rent a car to get around Scottsdale. Even though you can take public transportation or taxis, having your car will be much more convenient to see all the sites on your own schedule and within a reasonable budget.

Take time to plan your itinerary before you go to make sure you see everything you'd like to see. Scottsdale has plenty of attractions, but they aren't as in-your-face as theme parks and similar attractions you'll find in other major tourist towns. You'll have to be proactive to find the historical, cultural and recreational sites and activities that will give you the vacation you love.

You'll also want to head to Scottsdale on the off season in the spring or fall when the temperatures aren't as high and the rates are cheaper.