Chartering a Jet Flight from Toronto to Portland 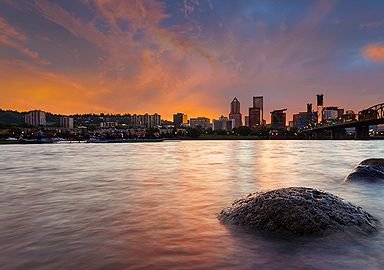 Portland is one of the most laid-back cities in the Americas. Although it is also a big, urban city, Portland features a whole new perspective in city living and authenticity. The big city is a mesh of nature and urban streets offering a relaxed lifestyle among the locals.
Portland offers a diversity of good old cities and modern, developed destinations. There is a good list of business locations to have your perfect meeting or conference. Convention centers such as the Oregon Convention Center and the Crowne Plaza Portland Downtown Convention Center are convenient for hosting big conferences while for smaller business meetings Hilton’s Double Tree and Portland & Executive Tower are comfortably available. The city is currently on the Top 50 U.S. Meeting Destinations.
Portland is considerably far from YYZ. Readily available for private use the nearest airport, only 9 mile from downtown Portland, is Portland International Airport (code KPDX). A private charter flight could make up for six hours and 58 minutes in the plane to make yourself fresh and delighted before your business affair starts.
Other nearby private flight-accommodating airports within 50 miles of Portland are the Portland-Hillsboro Airport (code KHIO), Portland-Troutdale Airport (code KTTD), Aurora State Airport (code KUAO), and McMinnville Municipality Airport (code KMMV).

Portland has their unofficial slogan of “Keep Portland Weird”, which literally embodies the lifestyle and culture around the city. They have a unique mode of transportation which they call the Portland Streetcar, delivering people with compact and sleek transport. Some locals also depend their daily commute is their world-class Max Light Rail which connects to various destinations such as the city, nearby areas and airports.

Unique shops and bookstores surround downtown Portland. Powell’s City of Books is a one-of-a-kind bookshop with an in-store cafe. They offer a variety of 1.5 million books in their shelves which cover a whole city block.

Gardens also dominate Portland’s attractions. The most renowned gardens in the city include the International Rose Test Garden and many others.